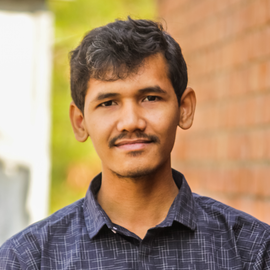 Shanto Roy joined the Resilient Networks and Systems Lab as a Ph.D. student in the fall 2019 semester. His research interest is in Cyber Security, Data Science & ML, SDN, Cloud-IoT ecosystem, etc. Earlier, he earned his BSc and MSc in Information Technology from Jahangirnagar University, Bangladesh in 2015 and 2016 respectively. Later, he served as a lecturer in the Dept. of Computer Science at the Green University of Bangladesh from 2016 to 2019. In the meantime, he contributed to several cloud-IoT ecosystem security and optimization projects. Currently, his research work focuses on Cyber Deception, an approach to minimize significant damages in an enterprise network by deceiving and misdirecting adversaries.